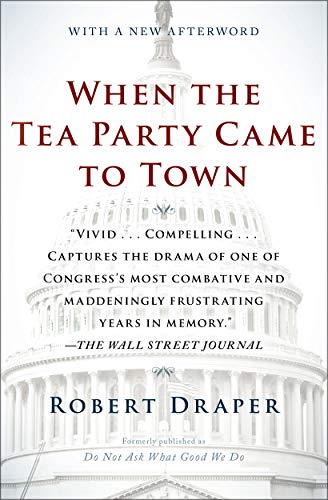 When the Tea Party Came to Town: Inside the U.S. House of Representatives' Most Combative, Dysfunctional, and Infuriating Term in Modern History

Buy on Amazon
Found in 1 comment on Hacker News
throwaway34241 · 2021-08-20 · Original thread
I think ideology plays a strong role in addition to interests. In my mind (from reading about this a lot) there are roughly four political factions at the elite level (there's probably more variation at the grassroots level).

The most interesting is probably the Republican party establishment. I recently read books by two partisans on either side [1] (both prolific authors and MIT PhDs) and they were in almost total agreement historically on the people and timeline. The Republican party starting with Barry Goldwater underwent an internal revolution, and an upstart and more hard-line faction won, driving out the Eisenhowers and Rockefellers. The second author is a member of this group, and he believes strongly in very small government (for example, he is against the post-1950s government and believes America was last America in the 1930s).

The other Republican faction is roughly the Tea Party, which this [2] book goes into more detail. It started being a more major force in politics starting in 2010 after financial crisis. I think Boehner who was the speaker of the house at the time has talked more candidly about this period after leaving office. They are angry at the status quo and lean more to the conspiracy side of things.

On the Democratic side there are the left (Sanders, AOC, etc) and the center-left establishment. They both generally support social-democratic policies so can work together, but the center-left is more market-oriented (maybe you could also say capitalistic or neoliberal) and they also differ in political style. I think people are pretty familiar with Sanders etc but here's [3] an article by a center-left economist talking a little bit about how the nature of this coalition affects what policies are possible.

[1] Krugman's Conscience of a Liberal and Murray's By the People