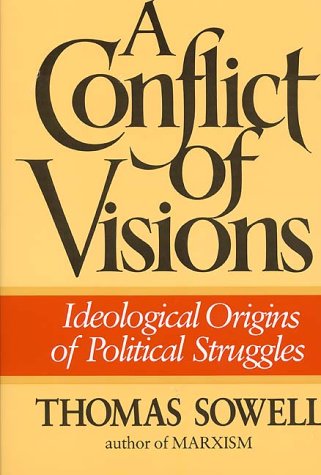 A Conflict of Visions

Buy on Amazon
Found in 1 comment on Hacker News
baryphonic · 2020-09-08 · Original thread
Whenever I read something like this, I wonder if the author ever had children, or even knows anyone with children. I have two. Children ages 2 and 3 are a strong counter-example to this "inmate human goodness" hypothesis and Rousseau's thinking in general. My kids at that age would often be about to trip over the last nerve with some sort of interruption only to say, "Mommy and daddy, I love you." In some ways, I think the goodness that kids these ages show must be some sort of evolutionary mechanism to remain "cute" and keep the parents from harming them (i.e. self-interested). Thomas Sowell (whose work I submit is likely far superior to either Bregman's or the Lancet reviewer Marmot's) has a wonderful quote illustrating it: "Each new generation born is in effect an invasion of civilization by little barbarians, who must be civilized before it is too late."

Bergman appears to be arguing against a straw man. I don't think anyone would say that human beings are completely, innately and irredeemably evil. I doubt even John Calvin would have argued such a thing. People want to be loved and they want to feel they are doing good. But we are good at lying to ourselves about our motivations, letting our emotions lead us into bad decisions and generally reacting in ways that preserve our own interests, status and livelihoods regardless of the cost (which we are adept at rationalizing away).

Rousseau's "unconstrained vision"[1] has a fundamental error: if humans are good, then human-created institutions should by and large also be good; if humans are good and human-created institutions are for whatever reason corrupting, then humans should be resilient to the corruption. I'd argue that neither seems to be true, but the latter seems particularly false and fatal for the unconstrained vision. The existence of even a few unchecked malevolent attributes is sufficient to create mass suffering. This is doubly true if the person believes herself to be innately good in all ways.