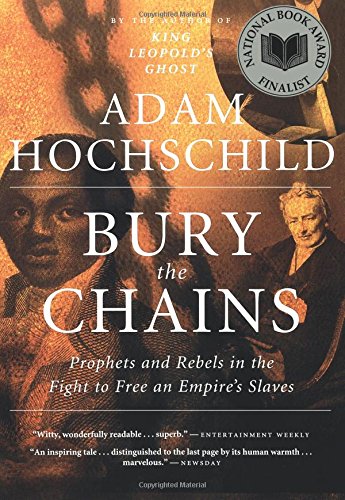 Bury the Chains: Prophets and Rebels in the Fight to Free an Empire's Slaves

Buy on Amazon
Found in 1 comment on Hacker News
spodek · 2021-08-16 · Original thread
Read just the introduction to Adam Hochschild's Bury the Chains. Amazon's free preview shows most of it at https://www.amazon.com/Bury-Chains-Prophets-Rebels-Empires-d.... Nearly everyone said similar things in England in the late 1700s about slavery. Those practicing slavery didn't see it as we do today, not even close, as the book explains better than I could, partly for their benefiting from it.

I suspect future generations will not see our continuing using fossil fuels as we do. I like to think if I were in eighteenth century Europe, I would oppose slavery and accept none of their excuses. They didn't have the benefit of future history. We do, and I hope we learn from past experiences, where a small number of people transformed empires in a short time. There are many differences between fossil fuels and slavery, but I'll note one of the big ones. The scale of deaths from fossil fuels is orders of magnitude bigger. Nearly ten million people die per year just from breathing polluted air https://www.washingtonpost.com/news/energy-environment/wp/20..., and that's a small fraction of what's to come.

To save a click, here are three relevant paragraphs that may illuminate the view of that situation at the time, but a small selection doesn't do the book justice:

> At the end of the eighteenth century, well over three quarters of all people alive were in bondage of one kind or another, not the captivity of striped prison uniforms, but of various systems of slavery or serfdom. The age was a high point in the trade in which close to eighty thousand chained and shackled Africans were loaded onto slave ships and transported to the New World each year. In parts of the Americas, slaves far outnumbered free persons. The same was true in parts of Africa, and it was from these millions of indigenous slaves that African chiefs and slave dealers drew most of the men and women they sold to Europeans and Arabs sailing their ships along the continent’s coasts. African slaves were spread throughout the Islamic world, and the Ottoman Empire enslaved other peoples as well. In India and other parts of Asia, tens of millions of farmworkers were in outright slavery, and others were peasants in debt bondage that tied them and their labor to a particular landlord as harshly as any slave was bound to a plantation owner in South Carolina or Georgia. Native Americans turned prisoners of war into slaves and sold them, both to neighboring tribes and to the Europeans now pushing their way across the continent. In Russia the majority of the population were serfs, often bought, sold, whipped, or sent to the army at the will of their owners.

> The era was one when, as the historian Seymour Drescher puts it, “freedom, not slavery, was the peculiar institution.” This world of bondage seemed all the more normal then, because anyone looking back in time would have seen little but other slave systems. The ancient Greeks had slaves; the Romans had an estimated two to three million of them in Italy alone; the Incas and Aztecs had slaves; the sacred texts of most major religions took slavery for granted. Slavery had existed before money or written law.

> If, early that year, you had stood on a London street corner and insisted that slavery was morally wrong and should be stopped, nine out of ten listeners would have laughed you off as a crackpot. The tenth might have agreed with you in principle, but assured you that ending slavery was wildly impractical: the British Empire’s economy would collapse. The parliamentarian Edmund Burke, for example, opposed slavery but thought that the prospect of ending even just the Atlantic slave trade was “chimerical.” Within a few short years, however, the issue of slavery had moved to center stage in British political life. There was an abolition committee in every major city or town in touch with a central committee in London. More than 300,000 Britons were refusing to eat slave-grown sugar. Parliament was flooded with far more signatures on abolition petitions than it had ever received on any other subject. And in 1792, the House of Commons passed the first law banning the slave trade. For reasons we will see, a ban did not take effect for some years to come, and British slaves were not finally freed until long after that. But there was no mistaking something crucial: in an astonishingly short period of time, public opinion in Europe’s most powerful nation had undergone a sea change. From this unexpected transformation there would be no going back.