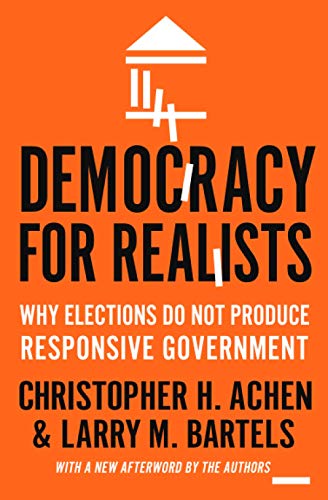 Democracy for Realists: Why Elections Do Not Produce Responsive Government (Princeton Studies in Political Behavior, 4)

Buy on Amazon
Found in 5 comments on Hacker News
lkrubner · 2022-06-18 · Original thread
To my mind, the most interesting question is the other way around. We have an abundance of data about the public, we have relatively little data about how the elites operate. As I've gone up in my career, and begun to reach elite levels, I've been fascinated to learn about some of the upper levels of the economy, some of the odd rituals that it has.

But my point is, if I want to learn how coal miners in West Virginia use curse words, I can easily learn about that. I own several good books about working class life in Appalachia, I've read half of them. But good books about the use of curse words among the elites? That is much more rare, and the situation tends to evolve at a faster rate.

Also, I'll point out, this form of journalism is fairly common. Over the last year I've seen several good essays that suggested various elite groups were misunderstanding the mood of the public. What is somewhat more rare is to read a book about how the public misreads the elites. Into this category I would, arguably, suggest that Democracy For Realists is the best:

I read this at the end of last year, and posted a few excerpts here:

The public also seems to misunderstand how much any political system, but especially democratic systems, depend on certain elites, and in particular political parties, to allow the system to continue to function. Consider the Panama Exception:

Occasionally someone is born into wealth and they turn out to be a great novelist, so they can write a novel that gives us some sense of growing up in the upper class. Interesting stuff. But in general, if I want to learn how poverty persists in Appalachia, I have many more books to read than books that teach me how the upper class transmits its status to its children. Some of the details of that operation are hidden, and difficult to learn about, save when we make friends with people who had that upbringing, and even then, we are only seeing a narrow slice of the overall process.

And obviously, the life of the wealthy frequently shows up on television and movies, but not in a realistic way. Such shows amount to a kind of obfuscation of elite reality.

patcon · 2022-06-09 · Original thread
disclaimer: i'm a bit of a lateral thinker so you might not like some of my metaphors, but fwiw they're backed by a biochem degree and a not-insignificant number of years working at intersection of tech/society/democracy.

I'm not a crypto fan, but am mostly understanding it as a financial churn mechanism. Wealth and power tend to pool and become self-stabilizing -- power is inherently conservative imho. Assets moving between hands is part of renewal cycles -- generally a chance for change or something different. It allows new possibilities to be stumbled into. Even just assuming we're doing a random walk of the possibility space, churn is better than stasis, no?

If there's any value in crypto, it's imho mostly about moving money between hands. Crypto has funded a ton of garbage and fads, but also a ton of research and advocacy. So yea, new garbage, but also new and different research and advocacy, different than we'd have had otherwise. I could certainly judge and express opinions on which hands it's moving between (and that's a site of action for justice work) but it can still be a net positive even when that's flawed.

re: moving X between hands. The value here is comparable to how some believe the main value of democracy is that it's a stable system for moving power between hands, and nothing more.[1] We wrap it in a nice story, but some smart people genuinely believe it's nothing more, and that most things we tell us about how and why democracy works, it's pretty suspect. (I've worked in democratic reform movements for almost a decade, so that's not an unconsidered perspective.)

Again, speaking of "churn" and keeping power circulating. The value of churn is kinda like the value of tidal action or diurnal rhythms generally -- it doesn't have a goal on which to judge whether it's "succeeding", but from the churn and flow of resources, it supports ecologies that find new niches. So maybe crypto has no purpose. But even if pointless, it can still have a role in the environment we live in.

Tides, democracy, american dreams, crypto or any goldrush past -- it's maybe stuff with mystique because each is a churn that creates some sort of renewal, like turning the earth with a shovel and mixing it up. I'm glad for most any churn, especially in a society lacking it in certain spaces, even if it leaves things to be desired. imho the alternative is to allow power to entrench more and more, which isn't the team i want to be on while wishing crypto away * shrug *

lkrubner · 2021-12-16 · Original thread
Term limits shift power away from the representatives that the public has democratically chosen and instead empowers those bureaucrats who serve in government for 40 or 50 years. Please see:

"Democracy for Realists: Why Elections Do Not Produce Responsive Government"

If you want democratically elected representatives to be able to gain power over the machinery of government, then you should advocate for longer terms, without limits. If every Senator was elected for 15 years, we would get better government.

> the goal of research, which is to expand the scope and quality of human knowledge.

But are we so certain this is ever what drove science? Before we dive into twiddling knobs with a presumption of understanding some foundational motivation, it's worth asking. Sometimes the stories we tell are not the stories that drive the underlying machinery.

For e.g., we have a lot of wishy-washy "folk theories" of how democracy works, but actual political scientists know that most of the ones people "think" drive democracy, are actually just a bullshit story. According to some, it's even possible that the function of these common-belief fabrications is that their falsely simple narrative stabilizes democracy itself in the mind of the everyman, due to the trustworthiness of seemingly simple things. So it's an important falsehood to have in the meme pool. But the real forces that make democracy work are either (a) quite complex and obscure, or even (b) as-of-yet inconclusive. [1]

I wonder if science has some similar vibes: folks theory vs what actually drives it. Maybe the folk theory is "expand human knowledge", but the true machinery is and always has been a complex concoction of human ego, corruption and the fancies of the wealthy, topped with an icing of natural human curiosity.

patcon · 2021-02-01 · Original thread
heh sorry, maybe it wasn't as strong a primer as I was recalling, since there's lots of noise around the message I was cherry-picking for my comment :)

It's basically saying at every level of existence and perception, actors that see fake versions of reality outcompete and drive to extinction actors that spend energy trying to see truth (and as a corollary, try to socialize truth). Shortcuts always win. Like not just one given level we might try to look at, like our mental heuristics, but at EVERY level.

At its core, it's basically saying "truth" is not energetically favoured in systems.

This gives me tons of pause for thought, in that I wonder how a truism like this might play out at the cultural level of organization, where evolution remains a force at play. I feel aware of the power of stories and lies to create simple narratives at all levels -- is this a manifestation of this sort of information energetics playing out? For e.g., the overton window being a constrained version of truth that [previously] created stability. Or the fact that democracy doesn't appear to actually function according to the folk theory we all tell ourselves, but maybe the simple (fake) story of democracy is what makes it work.[1] Or how we deceive about our own internal state in order to keep social homeostasis with others. Or that truth maybe doesn't have enough benefit to survive unless it has the cover of larger lies/deceptions to offset its penalty...? So what lies allowed the dominance of science to operate up til now, and how might we be shifting that balance within our new digital landscape?

I dunno, I have some background in this stuff, but haven't been in academia for a bit, so it's a bit armchairy :)