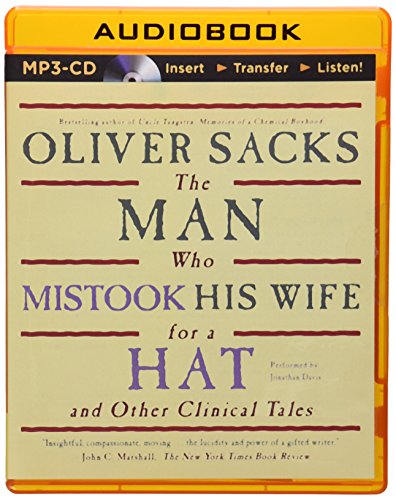 Man Who Mistook His Wife for a Hat, The

Buy on Amazon
Found in 1 comment on Hacker News
tasty_freeze · 2021-01-12 · Original thread
I agree everyone has a different definition for consciousness. But I'd argue that you could take any one of them and my argument would still apply.

One of my favorite books is "The Man Who Mistook His Wife For A Hat" by Oliver Sacks [1]. It contains a number of amazing cases of neurology where someone has suffered a brain injury and the facade of our apparently sophisticated consciousness is exposed a bit. For example, a guy who suffered a stroke and became blind, but was unable to accept it, so he lied to himself and rationalized all the resulting outcomes. The rest of his brain was 100% normal, was an articulate, intelligent person in all other regards. But he would confabulate extraordinary excuses to maintain his belief system. That story just drives home how much we as humans are capable of rationalizing.

I don't recall if it was that book or another that describes Capgras delusion [2] where a person sincerely believes that someone they know intimately, say a parent or spouse, has been replaced by a doppleganger, but are otherwise fully rational. They can even state that it sounds crazy, but nevertheless it is true. Or a form of it where they feel this way about themselves, leading them to believe they are dead yet still animate, is the Cotard Delusion [3]. What causes it? When one looks at their mother, an array of neurological connections to associated feelings and memories are activated; apparently in these cases, that doesn't happen in the normal way, and rather than concluding that something went wrong in their heads, they experience as this person in front of my looks identically to my mother but must be someone else and that is why those feelings are not arising.

The point of these two small examples is that our experience of consciousness and "me-ness" is a self-consistent facade, not nearly as deep as we feel it is, as site-specific injuries can result in profound flaws in that system.