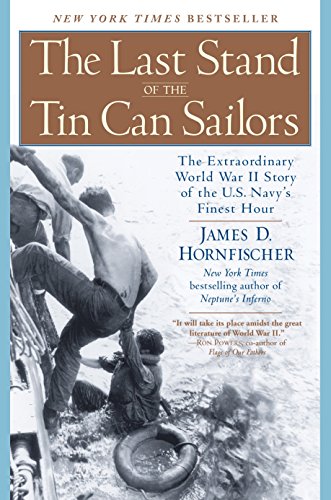 The Last Stand of the Tin Can Sailors: The Extraordinary World War II Story of the U.S. Navy's Finest Hour

Buy on Amazon
Found in 1 comment on Hacker News
smitty1e · 2021-04-03 · Original thread
> The 115m-long US Navy destroyer sank during the Battle off Samar in 1944 after a fierce battle with a large fleet of Japanese warships.

I tear up to think of this, as a retired sailor. "The Last Stand of the Tin Can Sailors"[1] is really about standing and delivering. Historians may not agree, but the Battle Off Samar[3] was a modern analog of Thermopylae[3].

One especially poignant moment was when the 5"/38 (of one of the ships, I don't remember if it was precisely this one) gun crew had lost ship's power and continued to train, elevate and fire manually. Until the breech was so hot that the next round cooked off and relieved them all of duty. It isn't often that the foe renders honors while they steam through your wreckage.