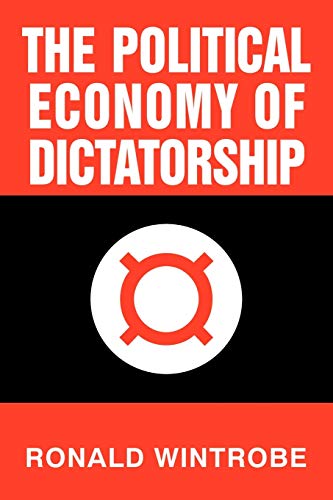 The Political Economy of Dictatorship

When Lenin overthrew the Czar he found himself in an immediate state of war with other elements of society and saw the need to establish a "Dictatorship of the Proletariat" which could suppress any elements of society that would want to restore the old order. The mission of that dictatorship was to be "socialist construction" which would end in the state of communism promised by Marx.

To be fair, in the time period from 1917 to 1960 or so the Soviet Union grew very quickly. They cracked a lot of heads (particularly repressed poor and rich peasants to get capital to build up their industrial base) but they went from a backwards agrarian country to having the capacity to resist Germany in WWII with the help of the allies and very rapidly developed nuclear weapons, space travel and other advanced technology.

Non-aligned countries like India were very impressed by the rapid development of the Soviet Union and hoped they could learn something from it in order to develop themselves since in the "imperialist phase" the world system seemed to promote development in countries like the UK at the expense of the rest of the world.

The point of the dictatorship of the proletariat is that competition in the society is suppressed and if you look at the Communist Party in a country like the USSR or the New China it is an organization where 2% or so of the population gets special privileges so that they can control the rest of society. They are supposed to be disciplined by the party and lose their privileges if they don't act in the interests of the party.

This really great book describes the conflicts that arise

Basically the manager of a business under communism has the motivation to use their personal relationships and knowledge to feather their own nest. In the long term this erodes the power of the party and the effectiveness of the economy. Purges are one mechanism that puts fear into managers and keeps them "on track".

It's very easy to talk about communism, but it's not so hard to practice. The New China is an interesting case study. Despite recent backsliding on the part of Xi Jinping, the rulers of China have thought hard about the experience of the USSR, other communist states, and their own country to develop a system that is competitive on the world stage.

expounds a framework in which politicians have a certain amount of resources to spend on preserving the system (e.g. spending on legitimacy, welfare, police and military) vs resources they can spend on their own priorities.

"Culture war" offerings on the left and right are free or very low cost so they are popular with politicians.