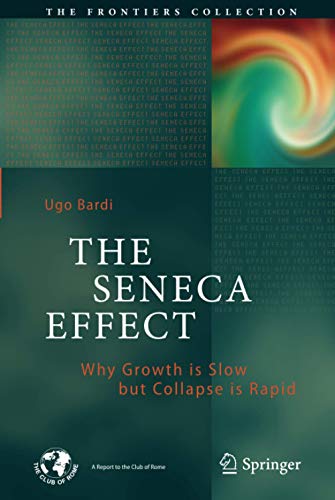 The Seneca Effect (The Frontiers Collection)

Buy on Amazon
Found in 1 comment on Hacker News
newdude116 · 2021-05-25 · Original thread
"So after your random-blog-post defense failed" I don't see this. The original post was just extraordinary naive.

"Germany already produces enough renewable energy to sustain all residential use." Maybe, a short look at the numbers look inconclusive. Besides that Germany relies on its neighbors to stabilize the net (speak nuclear!), it is unclear for me what the numbers mean. "Residential" use. Including heating? Basically everybody heats with oil or gas in Germany. You would also to take into account production costs (energy) of solar and wind energy harvesting systems. Please also see: "The institute’s Energy Charts project does not include data on the amount of power the generating facilities consume themselves to operate, or the power German industry produces and consumes without it being fed into the public grid."

The is an incredibly stupid publication from an MIT professor, claiming that energy efficiency is increasing (we produce more with less), based on statistical data. I think he did not understand the numbers. The US, like Germany is just exporting energy hungry productions to China. Consequently the numbers show exactly this. I emailed him the data an ask for an explanation based on his thesis but he did not reply.

"There is no real physical limitation to achieving 100% renewables despite your “argument”.

Either you did not read, or did not understand the link I posted. For the sake of the argument, lets assume that Germany CAN produce 100% of the required energy by renewable energy. What you don't take into account (besides exporting energy hungry productions): German does not only have to produce 100% of the energy, she has also to compensate for the GROWTH of energy consumption. Please read the article again. And this is something that is likely physically impossible.

"These are both very shallow articles."

You are free to have your own opinion. I consider both authors extremely smart. Gail Tverberg is possibly one of the smartest people I know. Ugo Bardi (not quoted here) is also worth to read. https://www.amazon.com/Seneca-Effect-Collapse-Frontiers-Coll...

PS: I think it was this guy:

The planet has a fever, and the cure is more capitalism, a prominent researcher argues

I emailed him that I think energy hungry production is just outsourced to China and that the seemingly more efficient production is misleading. I asked him based on the following two articles, if he still believes in his thesis:

But he did not reply.