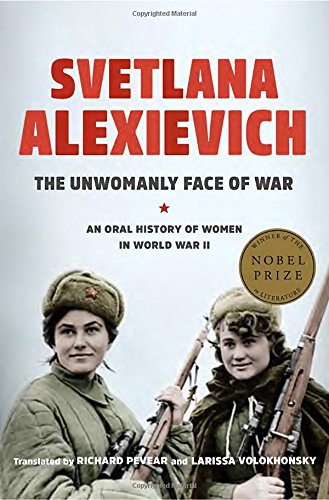 The Unwomanly Face of War: An Oral History of Women in World War II

Buy on Amazon
Found in 1 comment on Hacker News
gen220 · 2020-05-12 · Original thread
I don't have an answer, other than the observation that women, as a class, were generally excluded from authorship in most cultures, with rare exceptions, until relatively recently.

However, there are some "popular" examples. Jane Austen, Sylvia Plath, Kate Chopin (literature), Rachel Carson, Ayn Rand, Annie Dillard, Joan Didion (nonfiction). They aren't as fashionable today as they were in earlier generations, but that's fashion.

For me, Svetlana Alexievich (born 1948, in modern Ukraine) has been a revelation. I haven't read all of her works yet, but they're on my lists. I can give a strong firsthand recommendation for The Unwomanly Face of War (which recently got a P&V translation: https://www.amazon.com/Unwomanly-Face-War-History-Women/dp/0...).

Her work incidentally illuminates how we systematically lack certain accounts of history. The implication is that we miss pretty much everything "important", when we read history through the traditional lenses of the armed conflict and politics. The literary motif of giving voice to the politically voiceless is an everpresent theme in Russian literature (going back through Turgenev's treatment of serfs), and in the late 20th century it was brought to nonfiction, through Solzhenitsyn and Alexievich.

Statistically-speaking, most people do not spend their lives in the politburo, or in the general staff of the army, but those statistically-significant people do not usually write the history we read. It seems obvious in retrospect, but it's a revelation, and it tends to change one's perspective on the relative costs and utilities of war. As a culture, we're obsessed with the "individual", and we're typically obsessed with the "wrong" the individuals (i.e. the ones whose lives are exceedingly uncommon).

I think her work should be required reading for those seeking to become public servants, whose personal lives are often significantly detached from the consequences of the decisions they make in their professional lives. I don't know if I would call it life-changing, but it's up there.