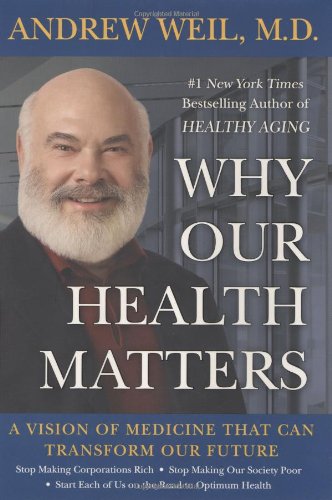 Why Our Health Matters: A Vision of Medicine That Can Transform Our Future

Buy on Amazon
Found in 1 comment on Hacker News
pdfernhout · 2022-05-08 · Original thread
Also related on problems with the current model, a 2015 book: "Deadly Psychiatry and Organised Denial" https://www.amazon.com/Deadly-Psychiatry-Organised-Denial-Go... "Deadly Psychiatry and Organized Denial explains in evidence-based detail why the way we currently use psychiatric drugs does far more harm than good. Professor, Doctor of Medical Science, Peter C. Gøtzsche documents that psychiatric drugs kill more than half a million people every year among those aged 65 and above in the United States and Europe. This makes psychiatric drugs the third leading cause of death, after heart disease and cancer. Gøtzsche explains that we could reduce our current usage of psychotropic drugs by 98% and at the same time improve patients' mental and physical health and survival. It can be difficult, however, to come off the drugs, as many people become dependent on them. As the withdrawal symptoms can be severe, long-lasting and even dangerous, slow tapering is usually necessary. In his book, Gøtzsche debunks the many myths that leading psychiatrists - very often on drug industry payroll - have created and nurtured over decades in order to conceal the fact that biological psychiatry has generally been a failure. Biological psychiatry sees drugs as the "solution" for virtually all problems, in marked contrast to the patients' views. Most patients don't respond to the drugs they receive but, unfortunately, the psychiatrists' frustrations over the lack of progress often lead to more diagnoses, more drugs and higher doses, harming the patients further."

And from 2013 by the same author: "Deadly Medicines and Organised Crime: How Big Pharma Has Corrupted Healthcare" by Peter Gotzsche https://www.amazon.com/Deadly-Medicines-Organised-Crime-Heal... "Prescription drugs are the third leasing cause of death after heart disease and cancer. In his latest ground-breaking book, Peter C Gotzsche exposes the pharmaceutical industries and their charade of fraudulent behaviour, both in research and marketing where the morally repugnant disregard for human lives is the norm. He convincingly draws close comparisons with the tobacco conglomerates, revealing the extraordinary truth behind efforts to confuse and distract the public and their politicians. The book addresses, in evidence-based detail, an extraordinary system failure caused by widespread crime, corruption, bribery and impotent drug regulation in need of radical reforms. "The main reason we take so many drugs is that drug companies don't sell drugs, they sell lies about drugs. This is what makes drugs so different from anything else in life...Virtually everything we know about drugs is what the companies have chosen to tell us and our doctors...the reason patients trust their medicine is that they extrapolate the trust they have in their doctors into the medicines they prescribe. The patients don't realise that, although their doctors may know a lot about diseases and human physiology and psychology, they know very, very little about drugs that hasn't been carefully concocted and dressed up by the drug industry...If you don't think the system is out of control, please email me and explain why drugs are the third leading cause of death...If such a hugely lethal epidemic had been caused by a new bacterium or a virus, or even one-hundredth of it, we would have done everything we could to get it under control.""

A 2009 book with some hopes for reform: "Why Our Health Matters: A Vision of Medicine That Can Transform Our Future Hardcover" by M.D. Andrew Weil (Author) https://www.amazon.com/Why-Our-Health-Matters-Transform/dp/1... "The second myth is that having the most elaborate and expensive medical technology in the world must translate into medical excellence. The reality is that medical technology has helped us in certain areas like the management of trauma and critical conditions. It has, however, served us very poorly in terms of creating cost-effective health care. In fact, one of the main reasons American health care is so expensive is that our interventions are based in expensive technology--including pharmaceutical drugs. There are many low-tech methods of intervening in disease that our doctors simply don't learn. Also, our entire health-care system is geared toward intervention in established disease, yet the vast majority of that disease is lifestyle related and therefore preventable. ... I think our efforts at prevention are feeble because we work from a model of prevention that is not very robust. The cornerstone of prevention should be lifestyle medicine. That means teaching people how to make better choices about how they eat, how they exercise, how they rest, how they neutralize stress. This is primarily something that needs to be done in terms of education, but the whole society has to pull in the same direction. The government and corporations both have to work to make the right lifestyle choices affordable and easy. You can't have the federal government telling people to eat more fruits and vegetables while at the same time making unhealthy foods cheap and healthy foods expensive through its patterns of crop subsidies. Also, a lot of our preventive efforts are very limited in that they have a lopsided preference for pharmaceutical drugs, like statins to prevent heart attacks or bone-building drugs to prevent osteoporosis. This is not the most cost-effective way to prevent disease. We need to think about prevention in new and better ways."

An earlier book from 1982 on this sort of issue, including the disempowering psychology of our current medical system: "Medical Nemesis: The Expropriation of Health Paperback" by Ivan Illich https://www.amazon.com/Medical-Nemesis-Expropriation-Ivan-Il... ""The medical establishment has become a major threat to health." with this opening assertion, Ivan Illich - one of the most brilliant social critics of our time - launches a devastating analysis into "iatrogenesis" (doctor-made illness), examining what medicine really does, as opposed to the myth that has been built around it. "Medical Nemesis" poses some basic questions not only about the medical profession but about the direction of modern society and its dependence upon a maintenance system that is categorically robbing us of power, money, dignity - even life itself."

From 1927: https://web.archive.org/web/20070222213243/https://soilandhe... "At this time in 1927, Dr. Shelton is already being harassed in his Hygienic practice by advocates of The Medical Mentality and by the police. In 1927, Dr. Shelton is jailed for the first time for "practicing medicine without a license" and is fined $100.00. This same year of 1927, a second arrest takes place, under similar circumstances and with charges of $300.00. His money is so tight this second time, he has to borrow to be released. Also, in 1927, the New York Evening Graphic lets Dr. Shelton go because he will not co-operate with their advertisement policies and insists on running an anti-smoking article. Still, during this time, Dr. Shelton's Hygienic practice grows; he is respected and admired for his efforts. The third arrest also occurs, all in New York, for "practicing medicine without a licence." The great irony is that Dr. Shelton would never "practice medicine"! Still, that is what the authorities call it when someone tells people how to live, how to sleep, how to eat, and how not to take medicines!"

Some quotes collected by me on the bigger picture of a broad breakdown in the scientific enterprise when profits and power are involved (especially in medicine): https://www.pdfernhout.net/to-james-randi-on-skepticism-abou...

Given all that context, it is hard to imagine psychedelics being that much worse than current treatments for mental conditions -- even if some might be mostly placebos.

The fact is, most mental ill health (not all, but most) can be inexpensively addressed by recognizing and then acting on this key fact: https://tlc.ku.edu/ "We were never designed for the sedentary, indoor, sleep-deprived, socially-isolated, fast-food-laden, frenetic pace of modern life. (Stephen Ilardi, PhD)"

A related book by Ilardi: "The Depression Cure: The 6-Step Program to Beat Depression without Drugs" by Stephen S. Ilardi https://www.amazon.com/gp/product/B0097DHV94/ "In the past decade, depression rates have skyrocketed, and one in four Americans suffer from major depression at some point in their lives. Where have we gone wrong? Dr. Stephen Ilardi sheds light on our current predicament and reminds us that our bodies were never designed for the sleep-deprived, poorly nourished, frenzied pace of twenty-first century life. Inspired by the extraordinary resilience of aboriginal groups like the Kaluli of Papua New Guinea, Dr. Ilardi prescribes an easy-to-follow, clinically proven program that harks back to what our bodies were originally made for and what they continue to need with these six components: Brain Food; Don't Think, Do; Antidepressant Exercise; Let There Be Light; Get Connected; Habits of Healthy Sleep. The Depression Cure's holistic approach has been met with great success rates, helping even those who have failed to respond to traditional medications. For anyone looking to supplement their treatment, The Depression Cure offers hope and a practical path to wellness for anyone."

Now, I know this all may sound like complete craziness to anyone who has bought 100% into the mainstream medical model -- but Virta Health is an example of one company growing quickly by using various non-drug interventions via telemedicine to get people off of diabetes medications: https://www.virtahealth.com/ "Our approach helps people lower blood sugar and lose weight, even while eliminating the need for medications, including insulin."

This is presumably sort of the virtual version of what people like Dr. Joel Fuhrman and others like at True North Health Center have been doing in clinical practice and in retreats. https://www.drfuhrman.com/etlretreat https://www.healthpromoting.com/ https://web.archive.org/web/20150430050047/http://drfuhrman....

This is potentially a huge growth area in the future for a great use of Y-Combinator-esque internet-based high-technology to support low-tech health interventions -- to help many people recover from chronic illnesses including diabetes, heart disease, and mental illness. Maybe not all -- but a lot. Essentially, the current Western Medical model is ripe for profitable-to-internet-based-company "disruption" or Peter Drucker's "Creative Destruction". Trillions of dollars that are being spent right now every year on "health" care (really "sick" care) in the USA are increasing in-play as they get redirected to new possibilities -- like Virta Health shows. Maybe psychedelics will play a part in this shift too (or maybe not). But change is possible -- and it seems to be gathering momentum.